David Sierra... Jumping Into The Void

To David Sierra, art is synonymous with saltando al vacio... jumping into the void. It is what his art means to him, it is the process by which he creates his art, and it is the way that he seems to have lived his life.

Beginning here in Merida over forty years ago, David does not seem to have lived a particularly charmed life. His father died when he was ten years old, leaving him the youngest of a family of five children. At the age of fourteen, he left home and he's been jumping and falling ever since. Like a Yucatecan Alice-in-Wonderland, he has kept his eyes and mind wide open, observing the strange and often surrealistic world around him and recording his observations in his art. He has had very little art instruction, according to him, but seems to have made up for his lack of formal training with an intensity and passion that has driven him to become one of the most accomplished and prolific young artists in Merida.

David Sierra started life in Merida, but he soon took to the streets and expanded his life further beyond this somewhat-isolated culture. His last "real" job was behind the Hertz counter at the Cancun airport, sometime back in the seventies. Even then, he says, he was only working to afford canvases and frames and supplies. His first exhibition was at the Cancun Convention Center in 1978, where he exhibited about thirty pieces, none of which sold at the time. That show gave him the courage he needed to quit his job and devote his life to art. He took all his wordly possessions and moved to Mexico City, the "if-you-can-make-it-there-you-can-make- it-anywhere" city for every young Mexican and the center of the Mexican art world.

In Mexico City, David worked with many important artists such as Blady, a contemporary of Rivera and Orozco, Leonel Maciel and Francisco Corzas. He worked painting murals, one in particular at the Biblioteca at a church on Calle Republica del Salvador with Blady, who he considers one of the last great Mexican muralists. David made attempts at going to school to learn art, but always found, he says, that school wasn't enough. He has an insatiable curiousity, and he found it more satisfying to read than to learn in a classroom. So his education consisted of spending time in libraries, reading everything he could get his hands on, and traveling around the city and country, seeing everything he could see.

At some point after his stint in Mexico City (David seems to have very little interest in specific dates), David made his way up to the United States. His first landing was in Philadelphia, where he found and studied the works of his favorite artist, Marcel Duchamps, the artist famous for the famous time-lapsed painting called Nude Descending The Staircase (see left). The time was probably the mid-80's, when the director of the 20th Century Art Department at the Philadelphia Art Museum organized a retrospective to mark 100 years since the birth of Duchamps. Like most Mexicans of his era, David was captivated by the Surrealist movement, and while Duchamps was a big influence, he also cites Dalí and the Dadaists as well as New York School artists like Rothko, Gorky, DeKoenig and Pollock.

For a brief but important period of time, David lived and painted in New York City. He lived in the lower part of Manhattan, at a time when the art world was coming into its own, and when Soho and Tribeca were still affordable places for struggling artists to live. He painted, performed, made videos and friends... but in the end, he left, finding New York a place where there were too many people, too much competition and too much loneliness.

His next stop was San Cristobal in Chiapas, where he worked with local materials and dedicated serious time and energy to wooden and stone sculpture. But he couldn't escape the siren call back to Yucatan, and by 1985, David was back in Merida. He continued to paint, and he worked to build the local art community. He started a magazine called the Camaleón about painting, film and literature which he published for a year and which won a national award for independent magazines. He produced a radio program about the arts, in which he conducted over 150 interviews with local artists. And he began to enter and win awards in local art shows. In 1992, one of his paintings won First Place for Painting in the Yucatan Bienal (it can be seen now at the Centre de Artes Visuales in Santa Ana as part of a show of the last 16 years of Bienal winners). By 2005, his work had been shown in over 27 collective exhibits and 24 individual exhibits, and he has continued to win awards and becas (grants) as he has continued to grow as an artist. Ask anyone in Merida's small art world about artists here, and the name of David Sierra is sure to be mentioned.

So what is David's art like? In an attempt to answer that question, we traveled to his studio to look around. David's art crowds the four rooms of his studio in downtown Merida, just east of the Plaza Grande. The outside is undistinguished... just another rundown colonial. But the inside of this colonial building is full of color, from the mosaico tile floors up to the top of the tall walls, which are full of David's work. His sculptures and art books take up every horizontal surface. There are oil paintings, drawings, watercolors, portraits, collages, wood sculptures, found objects, stone sculptures. If nothing else, David Sierra is an incredibly prolific artist and the profusion of shapes and colors and sizes and subjects seems to speak of a restless and searching soul with a lot on his mind.

When we asked him about that, he told us that for him, being an artist is making a pact with the devil of loneliness. He has to be alone to make his art, but that very loneliness is what drives him to create... working to create faces and personalities and scenes and ideas to stave off the Devil himself. Sometimes, like in a large painting called Huiromanía, the painting very well expresses this intense flurry of crazed creativity. The painting, whose title refers to the "mania" of ignorant people (referred to by the slang term, huiros) reminded us of a modern-day Hieronymus Bosch, brightened up with colors from a Mexican palette. The painting is almost a reflection of his back room, where paintings of all sizes and colors line the walls and hang in rows. People of all sizes and colors inhabit the paintings, evidence of the creator's own mania. Portraits peek out from behind landscapes, watching as their creator continues his restless and pressing quest for truth in art. "Art is a mirror", says David. "There are no lies in art."

Mysteriously, David's art can be as peaceful as it is passionate. His stone sculptures are serenely organic in nature, as calming to see as they are to caress. They seem to sit as silent witnesses to the noise from the two dimensional art around them. And even many of his most recent watercolors, which were displayed in a grouping on one wall, are abstract in design, but organic in their shapes and colors, and observing them evokes more peace than pain.

David showed us his most recent group of work, which he is calling Contra La Guerra (Against the War). This series of over 15 ink and watercolor drawings are monochromatic still-lifes of war images, turned to peaceful purposes. In one of the drawings, a revolver morphs into a fish. In another (seen at the left), a woman with a horse's body watches as a gun swallows the feet of a hooded prisoner and a fish wraps its lips around a crossbow, all in front of a wall that is both angular and undulating. These are images steeped in the surrealism of war, shot through with a simple and rather old-fashioned beauty. The juxtaposition of the two creates a intoxicating puzzle that kept us coming back to look at them again and again.

Before we left, we sat down in the front room, with sun streaming through the protectores, and we asked David about one large painting that looms from the front wall of the room (partially shown in the banner at the top of this article). The colors are the colors of a photographers's Golden Hour, that moment when the day is ending and night has not yet come. The golds glow and the blues deepen and pink nostalgia paints the images of a young girl, a statue of a woman and classical architectural elements.

What is this painting, we asked? In order to create, David replied, he needs to work within the very physical limit of time. In order to keep creating, he needs to forget what has gone before and focus on his next ideas. But sometimes, he keeps one or two of his paintings as a memory. The painting we asked about, he continued, is a precious memory, and while we can look at it and enjoy it, it is not for sale. When we asked David which is the best painting he has ever done, he doesn't hesitate. The best painting, he said, is the one in his head. That one is his and his alone.

David Sierra's work can occasionally be seen at the Galeria Merida or in museums around town. In addition, collectors can contact David directly in Merida at 999-169-8642 or knock on his door at Calle 57 #461A x 52 and 54 for a private showing. 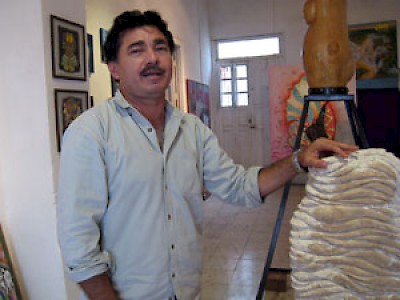 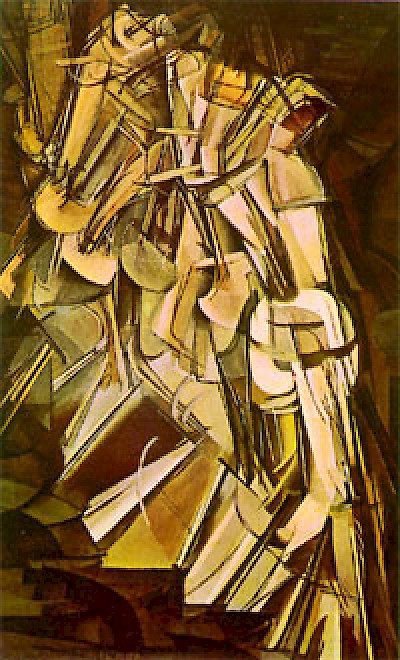 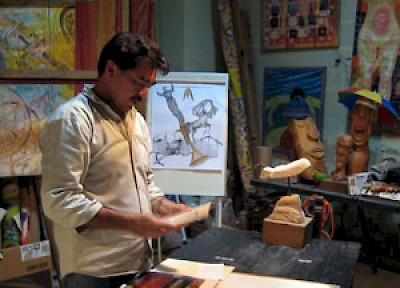 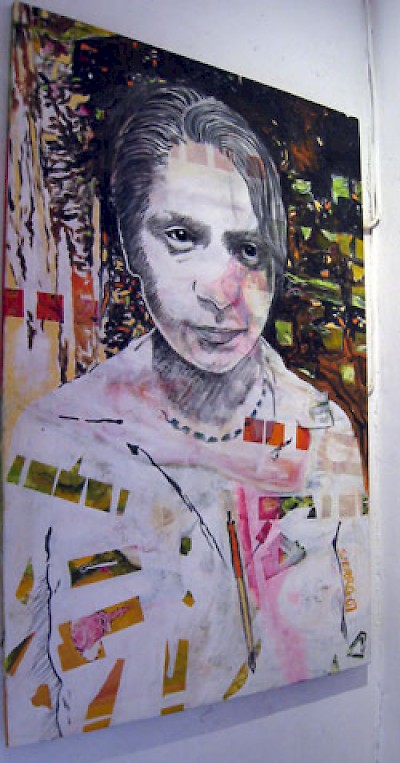 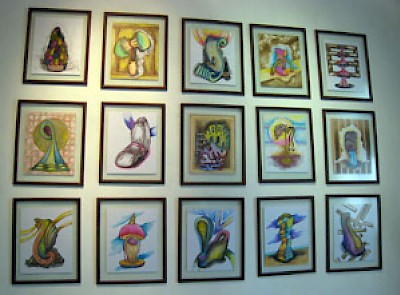 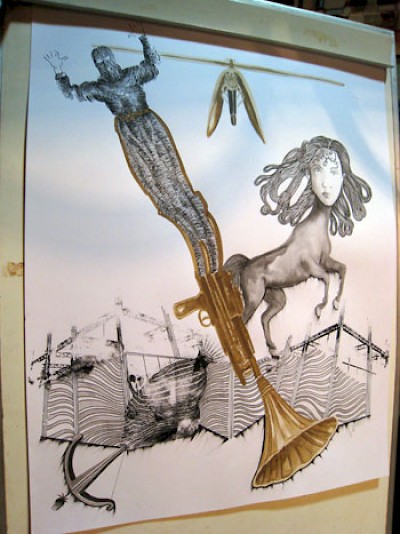 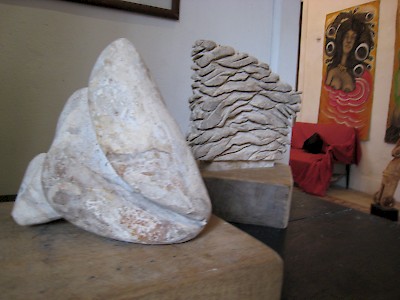 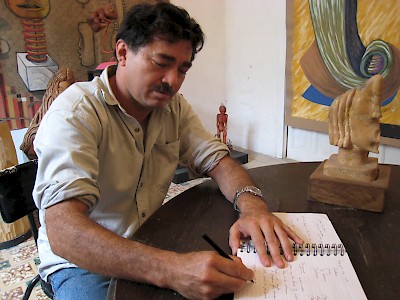 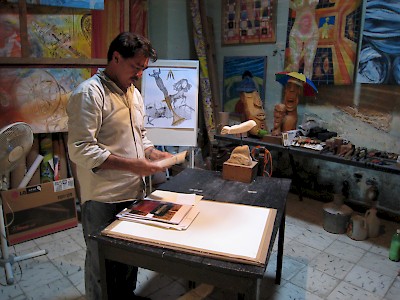