Looking for an art gallery in Merida? The area around Parque Santa Ana, which is on Calle 47 between Calle 60 and 58, is striking us lately as a nascent art district. There's the state-sponsored modern art museum, Centro de Artes Visuales, that used to be a grammar school, and there's the Luz Gallery which features modern Cuban artists. There's also the coffee shop, La Quilla, a little farther north, that has art-filled walls and a lovely interior courtyard, and there's el Dragon Sabio gallery two blocks north of that, also on Calle 60. Two blocks away on Paseo de Montejo, of course, is the annual outdoor sculpture exhibit sponsored by the MACAY museum, featuring sculptures from Mexico and Japan in 2007.

In the center of it all, and pre-dating practically all of it, stands the La Casa de Los Artistas (House of the Artists) (on Calle 60 just north of Calle 45), a bright yellow colonial building whose vibrant appearance is a clue to what is inside. This light-filled, art-filled gallery is owned by and is the exhibition space for two artists, Melva Medina and Abel Vasquez, who have created a lovely environment in which to view their work.

While joined by both marriage and gallery, Melva's and Abel's art make very separate and individual statements. Within two minutes of observation you will have no trouble telling which artist created which work, but after two and a half minutes you'll be noticing the subtle similarities and the way these two artists entwine their visions to enhance the expression of their individuality. It seems to us this could be what partnership (and marriage?) is all about.

We interviewed both artists to learn something about their process and what goes into their art. We started with Melva (ladies first!) who told us that her favorite medium is sculpture. She prefers it because of her tendency to get lost in the process of creating three-dimensionally and because sculpture has been a medium she can work in while still being with her young daughters. They are getting older now (8 and 12 years old) but when they were smaller, it was the one thing she could do while still including them in the process. You can tell when she speaks about her daughters how important being a woman and a mother is to her life and her art.

To be honest, when we first saw Melva's sculpture, we dismissed it rather casually in our minds as "modern" or "abstract", because although it is figurative (which we like), the figures are reduced to simple lines which express complex ideas. After spending a little more time photographing the work, our minds were won over by the visual double entendres and our hearts were won over by the voices of the sculptures themselves. Women's bodies turn into fruit, fishes adorn their heads and turn into braids... the woman and her world are inextricably one. The world adorns and feeds her, as she in turn nurtures and adores it. Like the women they usually portray, the sculptures are secure and solid, made from cast bronze but full of the lightness of negative space. Melva's sculptures exhibit feminine strength and animal beauty in passionate harmony.

Melva's prints, in contrast, are subtle commentaries on the human condition, experimenting with colors and textures that seem almost to undulate on the canvas, revealing occasionally a hint of female form. The prints are almost more emotional than visual, less precise than her sculptures and more mysterious than her intricate and beautifully composed drawings.

It was Melva's drawings that enchanted us the most. Most of her drawings available in the gallery are large in scale and the experience of seeing them in person after seeing photos of them on their website is strikingly different. When the pictures take up an entire wall, they seem to take on... well, to quote a common phrase... mythic importance. The woman bending over her daughter to fix her hair becomes the sky under which the daughter dances. The hair of the woman who watches becomes the wind that blows in the trees. Behind each drawing are archetypal messages that are emphasized in grand scale. The drawings are executed with studied composition, practiced skill and an open heart. They are beautiful and - we are happy to say - one of them hangs in our office, where we enjoy it daily.

In contrast to the somber beauty exhibited in Melva's work, Abel's artwork seems to populate the gallery with color and music. You can almost hear the singing, the maracas playing (or are those cacti?) and feel the stamping of bare feet on the ground. Abel, who comes from a shamanic family and has known he wanted to be an artist since his early childhood in Oaxaca, has a facility with colors that is most evident in his acuarelas (watercolors) and acrilicos (acrylics). His figures are whimsical, with long arms that end in mushrooms or feet that adorn figures in places where feet are not usually found. Fish and guitars frolic amongst cactus and sprouting seeds. Backgrounds and forms intermesh and change focus in a way that is visually confounding, playful and pleasing. In watercolor, Abel plays most with color and light. His acrylic paintings experiment more with texture and layers; he even sometimes adds arena (sand) to the paint to emphasize texture. In all of his works, he documents the human indigenous spirit, exploring the human condition with a smile on his face, his tongue in his cheek and his heart on his sleeve. The openness and joyful intensity with which he seems to approach life is communicated in his paintings.

One of our first favorites of his paintings is named Cual de Los Dos. Literally translated, this means "Which of the Two". The painting shows two indigenous women with two watermelons in front of them. The composition and colors of the figures by themselves are enough to love and appreciate, but when you understand the humor and history behind the phrase, the painting takes on new weight and layers of meaning.

Abel is an incredibly prolific artist who says that he creates his art because he has to. He loves to work three-dimensionally in sculpture because he is able to put his whole body into the process. That physicality can be seen in some of his latest works. These are shapes vaguely reminiscent of both fruit and seeds and flowers all at the same time. Some of them are carved from resin, some from solid stone. Some are a combination of carved objects and found objects. There are a few for sale individually, and Abel is working on a large installation of multiple shapes for a collector in Mexico City.

Both artists were classically trained at La Esmeralda, probably the most famous art school in Mexico City. Abel has a 20-year career in sculpture and painting, creating installations and single works that are in public venues and private collections. Melva went to graduate school at UNAM in Mexico City with an emphasis in teaching the arts. They both love to teach. Abel is currently teaching sculpture to architecture students at UADY and they have both held classes teaching the creation of alebrijas (the dreamlike sculptures of animals for which Oaxaca is famous). Right now, they are focusing on producing art for some large personal projects, but hope to hold art classes at their gallery again in the near future.

When they decided to leave Mexico City three years ago in order to create a better life for themselves and their two daughters, they visited Merida and knew instantly that this was the place. Abel says that he felt it immediately... a spiritual effervescence and energy bubbling from beneath the sleepy surface of the city. They think that Merida is just beginning to emerge as a center for the arts, and they are grateful to be here and to see the art community that is growing around them.

The Working Gringos would like to add a lusty "orale!" to that sentiment. Art is essential to life and to our enjoyment of it. More, please! 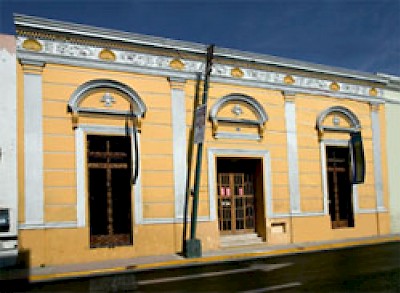 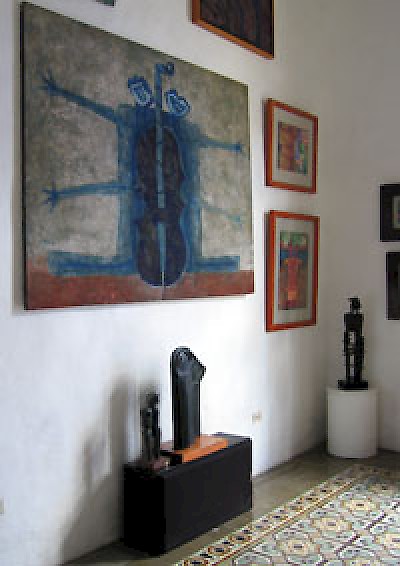 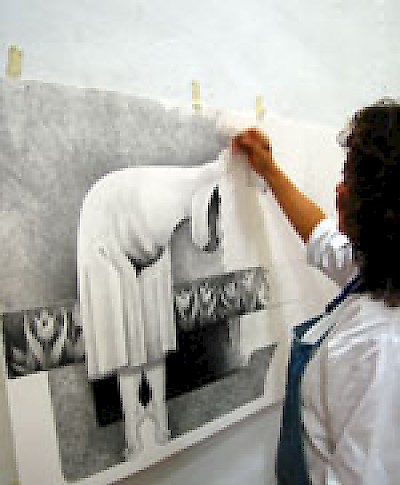 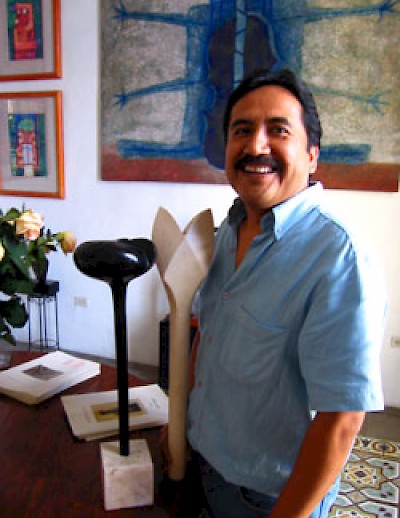 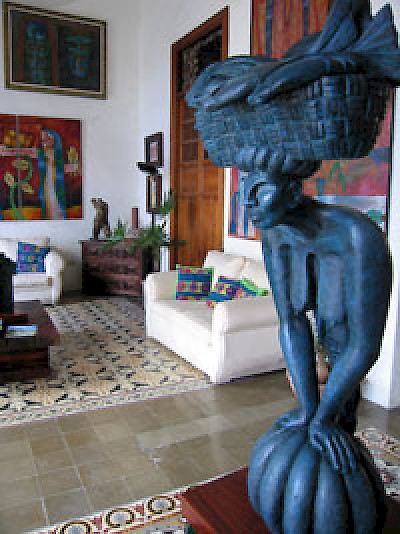