We are going to admit something. When we first came to Merida, all we wanted to do was shop (well, eat and shop...). Shop for all those wonderful handmade arts and crafts that we had seen in California that came from Mexico. And when we first came here, we had lots of time on our hands to do just that. We found wonderful hammocks, of course. Then a few guayaberas (never a huipile.... just not Working Gringa's style). We bought pots from a lady who came to our door, carrying them on her back, and we bought more in Ticul. We found baskets at the mercado, little woven calaveras (skeletons), purses and placemats made from sisal fiber, and various other wonderful items.

Apparently, we were not the only people asking this question. We have learned recently of a handful of extranjeros who have decided to spend their time and energy finding the answer. They have formed an informal group and are determined to search for and find Yucatecans who are not just craftsmen making a living, but who emphasize the "art" in artesania!

One of those intrepid searchers is Joan Farrell. Joan moved to Merida in November 2006, after living in Asheville, North Carolina for seven years. Before Asheville, she had lived in Washington D.C. for 25 years, where she had owned a craft gallery that specialized in naive and outsider art. Another buscador is Paul Ziegler, who has been coming to Merida for 22 years, and has lived here for the last seven of those. In his former life, he owned and ran an antique store in Atlanta which dealt primarily in folk art. Paul Ziegler's specialty in the past has been American ceramics. He noticed that the lack of high-fire ceramics and glazework in the Ticul area is a lack which severely limits the really creative artisans (not to mention that the pots fall apart after awhile in this weather).

Like a lot of people in this group, Joan and Paul came to Merida to relax, retire and slow down after long and successful lives in the arts. But when you do what you love, you can't just put it down like a book you've finished reading. Love is a story without an end, and both Paul and Joan's love of the art of craft found that the questions 'Where are the creative artists of the Yucatan?' and 'Where are the artisans who are thinking outside the box?' just wouldn't leave them alone.

Joan tried talking to the people selling woven goods, pottery and wooden toys in the zocalo on Sunday but found that they were mostly brokers who had bought things from people in villages and brought them to Merida to sell. She hunted, she inquired, she drove. Little by little, with perserverance and undying interest, Joan began to uncover a few artists who saw themselves in a different class. And this is a point we think it's important to make. While we extranjeros might think that we know when something is "better" or "more refined", we're happy to see that this group is primarily taking their lead from the artists themselves. They are looking for (and finding) artists who know that the skill they are pouring into their work puts it a cut above the normal producer of similar types of articles.

Another group member, Joanna Rosada (previously interviewed on Yucatan Living... click here to read her interview), has had an ongoing interest in finding ways to support local artisans and improve their lot financially. Joanna, Joan and Paul found themselves together one day at a social gathering, started talking, discovered their mutual interests and concerns and over time, decided to take action.

They gathered a few more interested extranjeros together to expand their reach and possibilities. At first, they investigated what might be available working within governmental channels. They participated in a few long meetings and ran into a few dead-ends. They talked to the Museo del Arte Popular, but were told that the museo had troubling inviting some people and not others... and that they would not be doing anything like this. So the group decided to do what they could on their own. They met and hashed out a plan.

So here's how it goes. There are ten self-appointed people who are spending the next six to seven months searching for and meeting with what they are calling, for lack of a better title, artesanias creativas. (It turns out that the word artesania in Spanish doesn't have the same connotations that 'artisan' does in English, and the artists and craftspeople themselves indicated that they felt there should be a difference in designation. The search is still on for just the right word.) They are working with these artists and craftspeople in places throughout the State of Yucatan.

First, they ask around and find a likely candidate. Then they observe their work and get to know them personally. They explain what they are doing and invite the artists to become part of the collective. So far, without fail, these artists are interested. Some of the artists have been so disappointed at going to government events and being consistently placed next to people selling chach-ke's made in China, that they had stopped exhibiting their work completely. One artist greeted the news of what this group is doing with the response "I have been just waiting for you to come along!". The response has been heartening, and helps keep the project going.

The project, which still has no name, has a few important tenets or guidelines. First of all, none of the extranjeros involved are in it to make a dime. They want to get it started, help organize the way it will work and then they fervently hope that the group of artists will come together and manage and grow the group by themselves. They envision a collective which pools money together to pay someone to administer, advertise and organize, with the bulk of the money earned going to the artisans themselves. Someday they hope to even buy or build a permanent exhibition space.

But first things first. First, the following extranjeros are on the hunt for participating artisans: Joanna Rosada, Benjamin Ramirez, Joan Farrell, Paul Ziegler, Martha Lindley, Craig LaBerge, Patricia Sava, Caroline Weiss and Tonya & Bob Kinsey. They have set a date of November 29th (mark your calendar!) for the first collective sale of works by these artisans from around the State. The sale will be held in Joanna Rosada's school building, the Tecnología Turística Total. The group plans to give each artist a generous space to exhibit their work and perhaps be able to demonstrate their working process. Their hope is that the community will come, appreciate the artists and their unique work, and find holiday presents at the same time!

Between now and then, the group will be working with the 15 artists they have identified so far, and any others that they find, to develop a body of work to show and sell at the show. The show will include statues, kites, mobiles, carved gourds, and other wonderful art that will probably make great holiday gifts. They would like to have about 30 artists overall, so if you know of someone who might want to be a part of this endeavor, please contact Joan (see information below).

As a precursor to the show in November, Joan Farrell is opening up her home this coming Sunday, June 15th, to show the works of two brothers from Oxkutzcab. These men are artists who have painted murals, among them the murals that grace the mercado in that town. A lesser known but equally exciting body of work by these brothers is painted stones. The brothers walk in the fields around their town, find stones that inspire them, and then bring them home and paint them. They have created a world of folkloric animals in stone that are whimsical, playful and magical. Since anyone who has seen these stones seems to want to buy one, Joan has decided to open up her home for a show and sale. From 10 am until 6 pm, the brothers will be at her home to talk about and demonstrate their work, and to sell their stones. All proceeds go directly to the brothers Bernabé and Leonardo Paz.

The next AANY show is...

Date: Saturday March 20 and Sunday March 21, 2010
Time: 10 AM to 7 PM on Saturday, 10 AM to 5 PM on Sunday
Location: Coparmex, on Avenida Hildalgo X 38th, Garcia Gineres (just west of the Donde Circle, Colón turns into Avenida Hidalgo. Go west (away from Paseo de Montejo) and then turn left after the railroad tracks on Calle 38.
Questions? Call Joan Farrell at 924-5257 or email joanafarrell@yahoo.com.

For information about the December 2009 AANY show, click here> 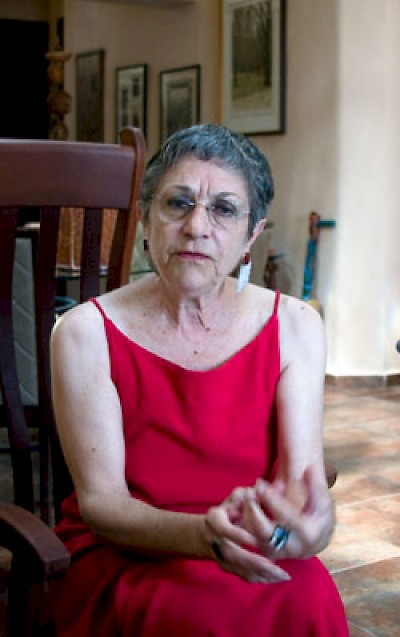 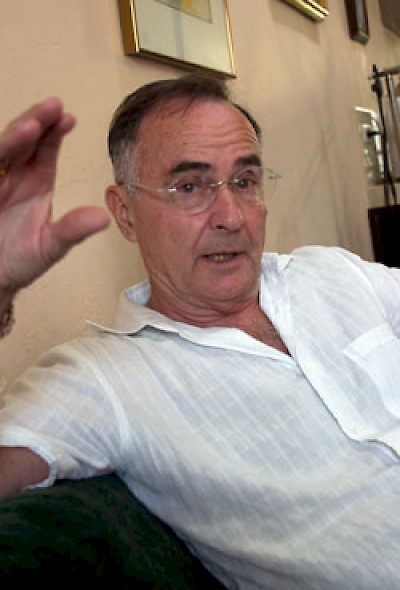 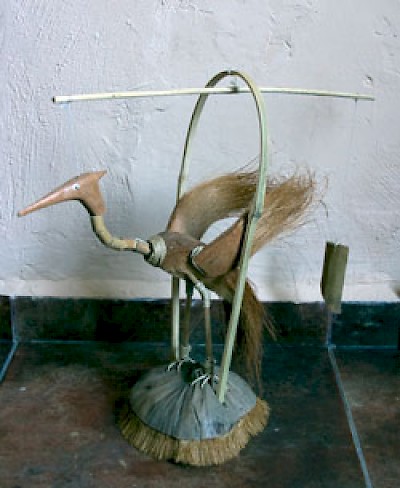 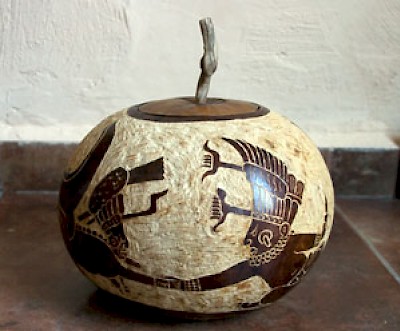 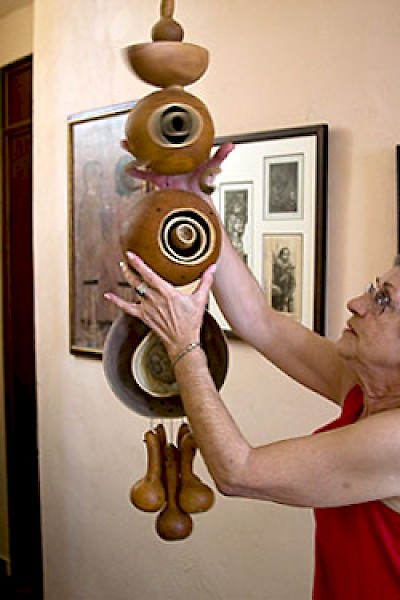 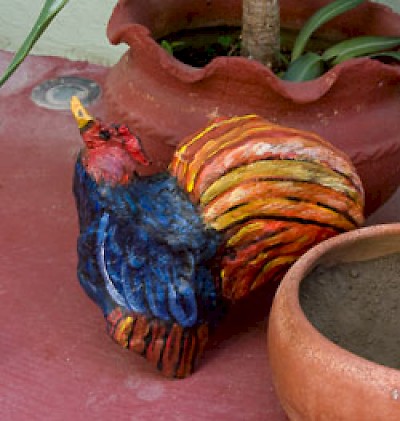 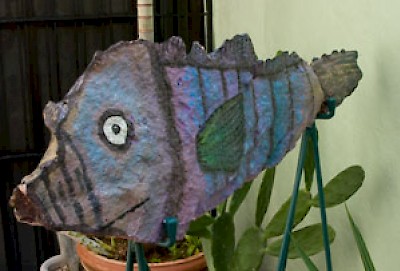