Even in Mexico, it is hard to imagine life without a cell phone. Well, maybe especially in Mexico. Mexico is the poster child for how so-called third-world countries leap-frog over technologies and adapt new technologies faster than the their first-world neighbors. It is not uncommon anymore to see a Mayan woman in a huipile on her cell phone. Every teenager certainly has one. And Carlos Slim, the owner of both Telmex (land lines and Internet) and Telcel (cellular phones) is not only the richest man in Mexico, but last time we looked, is also the richest man in the world. Think about that!

One day, we set out to upgrade our cellular phone service (which by the way, in Spanish, is called celular (sell-oo-LAR) or just plain cel). For the previous three years, we had been using a Telcel pay-as-you go system called Amigo. With the Amigo system (and others like it, though Amigo is by far the most popular), anyone can walk into almost any tendejon in Mexico and buy a ficha or card. Scratch the back of this card like a lottery ticket to reveal the hidden code, then marca (dial) star-33 on your cell phone, enter the code, and your account is credited with the face value of the card. Easy! Even easier, just walk into your local Oxxo or other store that sells the cards, and give them your money and your phone number. They will automatically credit your account with the minutes you paid for. Amigo cards come in denominations between $30 and $500 pesos, but you can put any amount on your card electronically. Telcel sometimes has a sale on these cards where you can buy a $500 peso card that credits your account with $900 pesos. But in general, the Amigo system will set you back about $4 pesos (about 26 U.S. cents) per minute for calls within your region.

There are advantages to the Amigo system. You can buy a phone and a card the moment you get off the plane or drive over the border. No credit necessary, no address, nada. On the flip side, the cards are rather unforgiving. If you run out of time when you are in the middle of a call, the call is over and you need to buy another card. With no money on your phone, you can't place a call, although you can receive calls and instant messages. On a recent cross-country roadtrip, we found out that the cards are coded by date and location. So if you buy a card in Yucatan, you can use it in Tabasco, maybe, but maybe not in Nayarit. And whatever time you buy with a card has an expiration date built into it. Also, if you have a business in Mexico, you can't write off the cost for tax purposes unless you buy from a store willing to give you an official serial-numbered receipt, a factura. Tendejons and street vendors don't provide facturas. After awhile, if you live here, the Amigo system becomes either inconvenient or expensive or both, so moving up to a "normal" cellular phone account makes sense.

There are five major cellular phone companies here in the Yucatan right now: Telcel, Nextel, IUSAcel, Axtel and Telefonica Movistar. Our first decision was which of these to choose. We chose to look into Nextel and Telcel, making sure that which ever company we chose, we could keep our Amigo phone number.

A very nice gentleman from Nextel came to our office and gave us a thorough and intelligent sales presentation in English about Nextel services. Once upon a time, Nextel phones acted more like normal phones and a Nextel cell phone number looks like a land-line number to other phones. The Nextel phones themselves had a walkie-talkie service that was available between Nextel customers. Nowadays, Nextel has become more like other cellular phone services, offering contracts or pre-paid plans. Nextel once had a very limited phone selection, but they now offer Blackberry phones and many other cel phones. And if they don't have a phone you like, you can even buy a chip with a Nextel number and plan, and install it on any phone you bought elsewhere. Now they have plans where you can call numbers from other cell phone companies using your minutes (but once your minutes are up, those calls cost more than Nextel numbers). With the Nextel prepaid service, you can buy credit for your phone in stores (like OXXO, Extra, etc.). Nextel advertises now that "all your calls are local". They have no national roaming charges and claim that there are no extra charges for calling to the USA. (We have not investigated this detail yet, but we plan to look into it).

Years ago, despite the great Nextel salesman, we went with Telcel. We may have been influenced by our past experiences with the Amigo service, which has wide coverage and exceptional reception. We may also have been influenced by years of watching those ubiquitous Telcel commercials with the big, blue hot air balloons imblazoned with the Telcel logo floating dreamily over various gorgeous landscapes of Mexico. In the end, we wanted to make sure that next time we went ballooning, we weren't going to miss an important call. We can't help ourselves... we want to Vive Libre con Telcel (Live Free with Telcel). Anyway, we do appreciate a good advertising campaign.

We visited the Telcel website to see what it would take to sign up for a normal account and made a list of the documents they required to establish our credit. Knowing the process would be a challenge, we prepared as much as possible ahead of time. Then we marched into one of the large Telcel offices with the following paperwork:

It used to be more difficult to get credit in Mexico as an expatriate, but it has become a lot easier now. Since we had all the paperwork, the process went very smoothly. When we entered the Telcel office on Avenida Itzaes (just north of the Bodega Aurera), there were two lines. The line to the right was for telling someone why you were there and receiving a ticket with a number. Once you had your ticket, you were to stand in the line on the left. On this day, both lines went smoothly and before we knew it, we were in front of a very competent young lady who answered all our questions, with the help of Beatriz (our silver-tongued assistant). She told us the costs of the service and the phones, took our datos (information), our documentos (paperwork) and told us to come back the next day to sign our contract and pick up our phone.

Let's take a minute to talk about the structure of cellular phone charges here. These used to be more straightforward than the convoluted financial puzzles offered in the States. At Telcel, with which we are now most familiar, there are different billing levels depending on how many minutes you want included "free" with your service each month. There are no rollover charges, no free nights and weekends, no time differences. Just a set number of "free" minutes per month for an eighteen month contract. The minutes over your allotted minutes are charged the same on all accounts: $1.10 pesos (ten U.S. cents) per minute for anywhere in Mexico. Roaming charges are a thing of the past. There are separate charges for downloading emails from the internet, for getting a detailed bill with each phone number on it and for various other special services, none of which we felt we needed. We selected the National Plan with 160 minutes for $516 pesos per month, which includes administrative charges you don't pay when using Amigo cards, but definitely saves money if you use your phone very much.

One day later, Working Gringa went back at 10 AM to sign the contract, following the hard-learned lesson that if you want to accomplish something official in Mexico, you start in the morning. Well, not so fast, gringita! Just when you thought you had it all figured out! No, the contract no esta lista (isn't ready). Come back tomorrow. Upon hearing this, Working Gringa forgot everything she has learned in the past five years and lost her composure. Why did they tell her to come today? Don't they realize she is a busy woman and doesn't have time for this?

Lady, you want your phone? Then come back later.

First the line on the right. A long line this time, with no one behind the podium. Determined to go with the Mexican flow, Working Gringa stood there, munching on a delicious coconut candy she had bought from the man just outside the front door. She looked around, enjoyed the photos on the wall. Tapped her foot to the music. Finally, a woman showed up behind the podium and the line began to move. When Working Gringa arrived at the front of the line, the woman took one look at her name and walked into the back to find something. More foot tapping. Humming to the music. Ah yes, 50's music... How Sweet It is To Be Loved By You. La la la.... the woman came back, Working Gringa got her little ticket and went to the second line.

There was a Diario de Yucatan newspaper on the table next to the line. Working Gringa read all four sections, understanding what she read better than ever before. Plenty of time to parse each word.

Someone came to change the music. Now it was show tunes. "Oh, what a beautiful mooooooor-ning!" The line crept forward. Finally Working Gringa was the next in line. Four different representatives in the row of cajas went on breaks before finally one of them called Pase! and Working Gringa stepped forward.

Ten signatures. Three copies. Show the passport. Wait while they find the phone. Patience and diplomacy.

While she was waiting, Working Gringa thought that maybe they had switched the music to American Show Tunes just for her, the only gringa in the building! Oh, that would be too embarassing, especially because they were playing particularly obscure and awful showtunes from the Seventies. Finally it was even too much for them, and someone flipped the station to Mexican pop music, much better and much more foot tapping all around. Finally, the phone arrived. The woman in the caja put in the new chip, gave Working Gringa a copy of her contract, and she was fuera de alli (outta' there)!

March 2009 Update: Working Gringa made the unfortunate mistake of washing her cell phone in the washing machine, necessitating a new phone. Much to her surprise, the Apple iPhone turned out to be affordable ($1800 pesos after applying "points" earned for paying her bill on time for the last eighteen months). The two year contract gave her monthly phone service and unlimited internet for less than $75 USD per month. Sold! 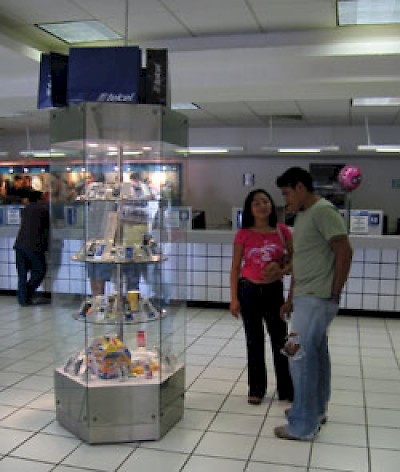 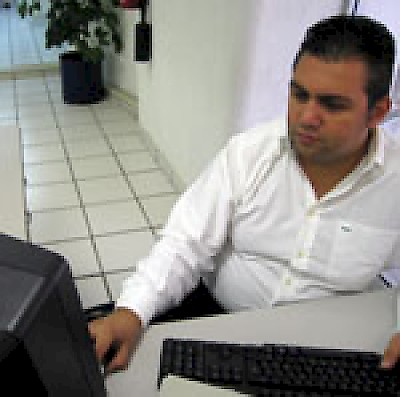 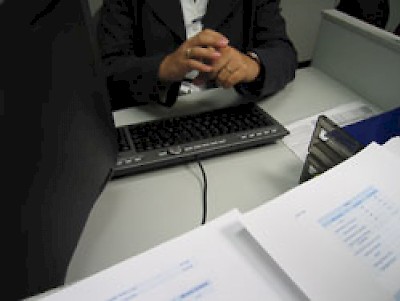 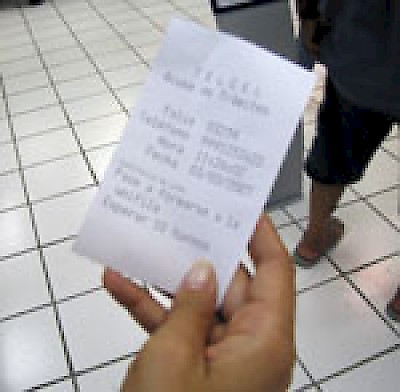