Dr. Bernd Neugebauer in the Yucatan

“The old Mayans had lakes all over,” says Dr. Bernd Neugebauer, waving a lanky arm over the small valley. “You don’t have any surface water today, but when Hernan Cortes climbed the big pyramid at Uxmal he registered in his diary that he saw some two hundred lakes from one spot.”

We are seated on a limestone hill covered in brown leaves and young jungle. An excavator moves stones to dam the valley below. Dr. Neugebauer points to the hollows and tunnels in the stone explaining the Mayans’ water purification process relied on water filtering through the gaps, removing dirt and debris with each decantation.

“It was advantageous for the lake to filtrate; to be a little porous,” says Neugebauer. “One lake would feed another until it ended in a swamp and the water wouldn’t run away anymore,” he continues.

“The whole secret to high-density population in Yucatan is rainwater management.”

The dam being built today is one of a pair. The “animal lake” near the bottom of the valley is built for wild animals, which discourages them from coming uphill to the village’s main supply. A “Guardian of the Water” could also be posted near the dam to monitor flow and chase away critters with a slingshot.

“Once the water comes and the soil is quenched, the birds follow and bring enormous biodiversity. If you have a lake for more than a year, you can be sure a crocodile shows up. No one knows how it gets there, but it comes. Mayans say it was sleeping in the soil. That is maybe the best explanation of all.”

Bernd first came to the Yucatan from Germany in his twenties to study farming techniques. On that first visit, he found acres of deforested land overtaken by thorns and dust. As a trained silviculturist, tree expert, Bernd could see what was happening.

“The last massive timber extraction project in the state of Yucatán ended in the 1960s. Thereafter not a single Mahogany tree remained.”

During that trip, he bushwhacked to a hilltop near Santa Elena and noticed the fingerprint of an abandoned village. Since then, he has been rebuilding the village with help from the community while raising children and discovering the secrets of Mayan agricultural and forestry.

In Mayan civic tradition, the smallest unit of civilization is a Chan Ka: a village which sustains 7 households. This milestone also qualified the community for a vote to be cast by the village patriarch. Bernd is the patriarch of Chan Ka Vergel.

“The secret of the Mayan culture lies not in its big pyramids but in their daily life and culture,”

he tells me as we discuss the basics of Mayan governance. It was unique for many reasons but the most interesting to me was that the government was completely dissolved every fifty years so new leadership could take over. The cycle of life, death and rebirth is a constant among early civilizations and regrettably absent from our modern way.

Upon arrival Bernd offers his garden to us for lunch. We gather a variety of greens from the spiraling Hugelkultur beds for salads. The smell of damp earth is strong and refreshing among the abundant vegetation. We top our salads with oil and salt dressing and a glass of fresh squeezed aloe lemonade.

Afterward, we toured the property: organic crops of achiote, aloe vera and chili peppers; a restored Temazcal (ceremonial sauna); and the main house, which will soon become a school for sustainable agriculture classes. Dr. Neugebauer currently works with European exchange students and groups by special arrangement and plans to expand these offerings in the future.

I first met Bernd at Tulum Art Club where he was showing a short film and speaking about maintaining Tulum’s water resources. His background in forestry, agriculture and archaeology gave him credibility and his ideas were logical and uncomplicated. Offer recycling facilities outside churches, for example, to encourage the practice and link it to moral responsibility. Most of his ideas are based on traditional Mayan social structure and rely on tight-knit communities, which are already the backbone of Yucatan.

"Sustainability must rely on respecting the natural mechanisms for productivity and health."

I approached him after the lecture to express my gratitude and get clarification on a few points; the talk was in Spanish, rendering the information just inaccessible enough to be mysterious and exciting to me. A few months later, I was headed to his farm in central Yucatan to visit and learn more about this intriguing figure, “Bernardo del Monte.”

Dr. Neugebauer is pursuing several projects at Chan Ka Vergel with the primary intention of providing sustainable jobs for the community. Their first success was with organic aloe and, as we follow the concrete aqueducts back toward the car there is evidence of a new turmeric processing operation. There is a large cauldron simmering about 75 pounds of turmeric over a fire. Nearby, an industrial solar dehumidifier is getting the finishing touches—a tall chimney for exhaust—to process the turmeric and other organic products. Bernd assures me he’s learned the very best turmeric preparation technique in India.

We look up at the bricklayer balanced atop the chimney. “I told him to build it 4 foot below the sky,” Bernd jokes.

Preparing to leave, I was caught by the rare balance between traditional and modern life here. Bernd’s farm is a microcosm of the Yucatan in it’s small community resourcefulness, environmental stewardship, deep traditions and modern applications. Drawing on the ancient Mayan wisdom, Bernd’s expat background provides a wide lens to view the future of sustainable living in the Yucatan. 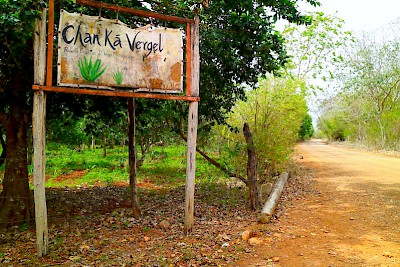 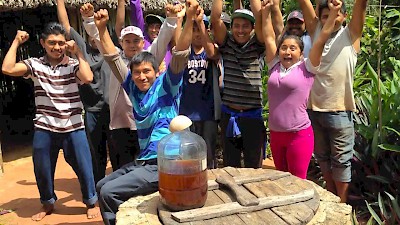 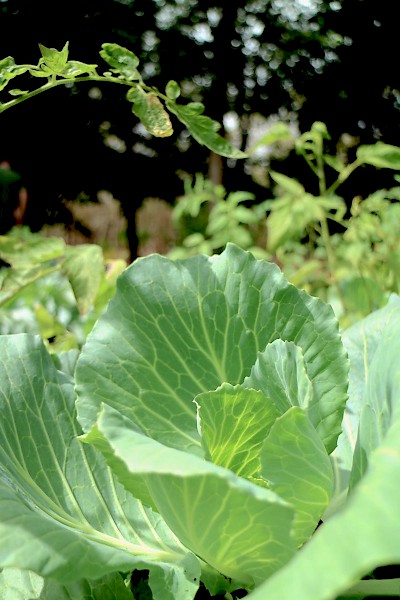 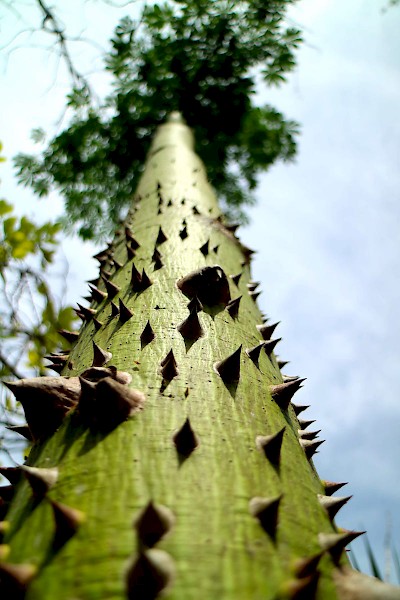 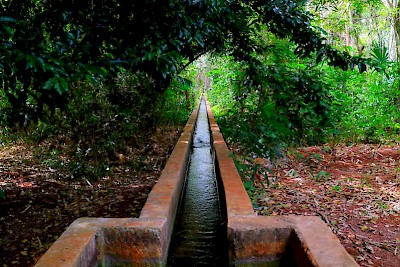 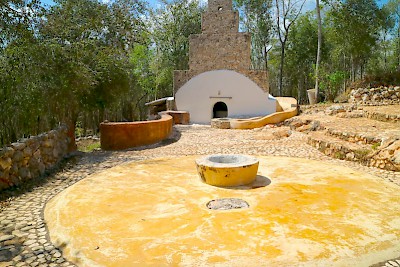 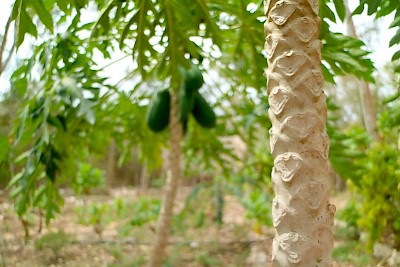 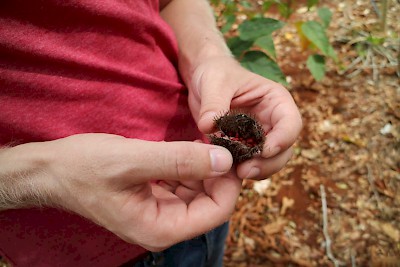