EDITOR'S NOTE "Meet the Artist" details below body of article! This article was updated in October 2018. The original accompanying text is from The Working Gringo's 2006 article.

One of the treasures of any area is the artists who choose to reside there. As artists, they observe and filter their surrounding environment through their creative process and produce artworks that, usually, reflect something of the culture in which the art was created. One of Merida's art treasures is a 30-year resident of Mexico, originally from Chicago, Georgia Charuhas.

In the Sixties, Georgia graduated from the Chicago Art Institute. She married soon thereafter, and spent the next few years traveling and painting. One of her trips took her to visit some friends in Puerto Vallarta. The friends were living in a house next to Elizabeth Taylor. Georgia says those were heady times in Puerto Vallarta, right after the filming of the "Night of the Iguana".

Georgia and many others were just discovering the beauty and allure of tropical Mexico. Georgia ended her marriage in the United States, moved to Mexico and never looked back. Eventually, she left Puerto Vallarta for a quieter place, and she ended up in Merida.

People who lived in Merida then say that when Georgia Charuhas moved to Merida, the traditionally conservative society was shocked by the presence of a young American woman living on her own in a foreign land. She was a beautiful woman and an outspoken one, and she caused quite a stir, especially when she was raising and riding her horses on the beach in Progreso or running her own clothing company based on her original designs. Georgia's dresses, based on Mexican designs but with a gringa's sensibility, sold all over the States, including in Bergdorf Goodman's in New York City.

Georgia eventually married again to a Mexican gentleman who was later killed in a tragic car accident in front of the furniture store they owned together in Cancun. Now Georgia lives alone, with 14 cats and 5 dogs (she helped start the AFAD animal shelter that we chronicled earlier). She spends her days painting and managing her store at the entrance to the Mayan archaeological zone of Uxmal.

Georgia's house and studio are filled to the brim with her paintings and drawings, as well as collections of works by other artists. Books and paintings line the walls. Georgia loves white wicker furniture and says that white is the preferred color in the tropics because you can see the bugs crawling across it more easily. Hmm, we never considered that before but it makes sense!

In the back of the house, behind the pool and brightly painted iron outdoor furniture, is the spacious studio where Georgia creates. Inside the studio are stacks of canvases, tables full of paints and brushes, pieces of old furniture with interesting shapes, manikins, posters of Georgia's couture designs, and paintings, paintings and more paintings.

Wait. Couture designs? Furniture store? Horses on the beach? Who *is* this woman?

We first met Georgia at the Galeria Merida on the opening night of a show of her work. Somehow we found ourselves across the table from her, all of us with wine in hand, enjoying a fascinating conversation about Life, writing, art, poetry and living in Merida. Later that night, Georgia read some of her poetry and we were captivated, not just by the poetry itself, but by the way she read it, with passion and charm and a glint in her eyes that is all too rare.

A few days later, Georgia called and commissioned us to photograph her upcoming show, called "El Laberinto", at the MACAY, Merida's modern art museum. We agreed, and spent three days painstakingly photographing her rather large canvases. It was there that we started to be entranced by the magic in her art. The creatures came alive as we spent time with them, staring out enigmatically from their dark and complex worlds. Their faintly Mayan faces disturb, delight and puzzle. Dogs and tigers prowl and twist. Strange dwarves hold little mice in their arms. And all of them leave the observer curious about where they came from and why they are here. In the end, some of these creatures stole our hearts and we traded our photographic work for one of our favorite artworks, and bought two others. We've been collecting Georgia's art ever since.

About a year ago, Working Gringa was lucky enough to be given the opportunity to study art with Georgia as well. And so, for the last year, once a week, WG has been making the pilgrimage to the studio in the back, laden down with brushes, pencils and paper. There, for three hours a week, Georgia creates her own art while her students create theirs, every once in awhile coming up with a perfect well-timed gem of art instruction. "No straight lines!", she'll say or "Look! That cheek is much rounder than that." She doesn't instruct a lot... but what she says always pierces to the heart of the matter. She encourages her students with well-placed comments and thoughtful praise. After a year of this, WG is finally getting to the point where she isn't afraid to put pencil to paper and must admit that sometimes she actually creates something she likes.

While Merida isn't known as an artists' community like San Miguel Allende or Todos Santos, this city has a personality and ambiance where magic thrives, so it's a perfect place for an artist. Inspiration is everywhere. There are quite a few original artists here and we will be profiling more of them on these pages in the coming months. 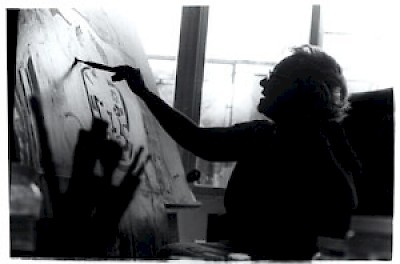 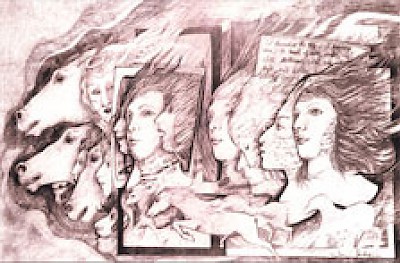 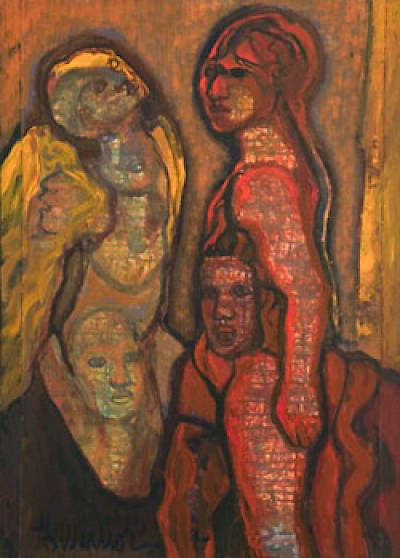 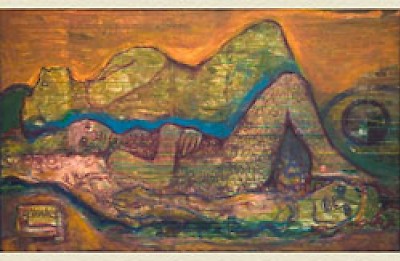