Driving With Dogs Through Mexico

Editors Note: The following is an account by one of our readers of traveling from Vancouver, Canada to Merida, Mexico by car with two dogs in the spring of 2010. We get inquiries all the time about traveling with dogs, so we thought this would be of interest to many of you. Of the airlines that fly to Merida, Continental is the most dog-friendly. On their website, you’ll find information about how to fly your dogs on their airline, and there are English-speaking personnel at the Merida airport that can discuss options with you. But flying isn’t for everyone… or for every dog. Driving through Mexico with dogs presents its own problems, and this articles addresses some of those issues. As always, we welcome your comments!

My wife and I finally made the move to Merida after almost 4 years of planning and research. We drove 7,300 km to move to a city that we had visited only once. Even though we had only been to Merida one time, I had read and researched the city for many hours. I estimate that the time I spent researching the city and the surrounding area clocked in at over 2000 hours.
In planning our move, our original thought had been that we would fly from Vancouver to Merida, shipping only a few belongings (mostly books). However, and this is point of this article, we quickly discovered that one of our dogs, Lucy, would not be able to fly. We could find no airline that would fly her into Mexico (we even checked FedEx!). Lucy is 3 years old, and an English Mastiff that weighs in at 191 pounds. Not only was her breed on the “no fly” list, but the only crate that she fit into was bigger than allowed by the airlines. Our other dog, Josie, was no slouch either. Josie is an 8.5 year old yellow Labrador Retriever and definitely runs with the Big Dogs.

Since our dogs are family and we would not dream of moving to Mexico without them, we resigned ourselves to driving to ou new home. We mapped out a route using many different programs that took us from Vancouver, BC to Merida via the quickest route. We also considered various options for crossing the border, hoping to drive the safest route.

We decided to cross to Mexico at Nogales, Arizona. The customs check at the border was not thorough or intimidating in any way. They did not check the dogs or their papers (though of course, we had all the shots and documentation from our vet in Canada, in both English and Spanish). The crossing did take a little longer than e had planned, so our first night in Mexico was spent in the next big town that we came to, Hermosillo.

We checked with a couple of hotels upon entering the city and were greeted with the same refrain: “No, they did not allow dogs in the rooms. No, they did not allow dogs period.” One kind person suggested that we check with the San Sebastian Hotel, luckily. We went there, and sure enough, they said “No problema!”. They asked if we had crates, which we did.  But in the end, we did not have to keep the dogs in the crates. The guards and the staff at Hotel San Sebastian were super, and we can highly recommend that hotel.

The next morning, we left Hermosillo and drove to and through Mazatlan, and then headed east. When we drove through Mazatlan, we experienced the most aggressive street people.  After being asked again and again to have our windshield washed, we just rolled down the back window and our dear sweet Mastiff let out a couple of deep barks. What do you know? No more street people! A few of them yelledCujo!in fun, and we were on our way.

We made it to Culiacan for the second night and stopped at the first large hotel on the road into town. The manager at the Hotel Zar checked with his boss and they too said no problema. Hotel Zar, as you can see from the photo, was actually a pretty nice hotel. The dogs were welcomed there. Though most of the other guests seemed to steer clear of us when they saw two such big dogs, we were able to keep them in our room and walk them around the grounds with absolutely no problems. We weren’t charged extra to keep them with us, either.

From Culiacan we drove on to Guadalajara and found another Zar hotel on the way into town. Again, there was no issue with the dogs and we had a good place to spend the night.

Our biggest challenge occurred the next night. We drove through Mexico City, which was a challenge in itself, as we were pulling an8000-pound cargo trailer (we have a lot of books!). We managed to navigate through the city, though we hear that there is now a way to circumvent it and we would have if we could have. After making the crossing, we continued on to Puebla.

We checked with the Holiday Inn in Puebla, which we had read was dog friendly. They weren’t what we would call dog-friendly, as they offered only to put the dogs in their crates in a storage room for the night. This was totally unacceptable to us, so we continued on. We were getting tired, and finally we decided tocheck out a truck stop motel on the edge of town. This appeared to be the kind of motel that could be rented by the hour, with all the places that a car or truck could park hidden from view. The place was quiet, they accepted the dogs and it actually worked out just fine.  At this hotel, we had a very basic room, which was clean and cheap ($260 pesos for the night), and we were all happy.

The Last Stretch to Merida

The final day, we woke up and set off to spend our last night in Villahermosa. Again, we had read that the Hilton there allows pets. Just in case, we called ahead and they said that they would take the two dogs. The Hilton in Villahermosa is actually a very nice hotel and they no dog issues. We were able to keep them in our room, walk them around the grounds and even through the lobby a few times. They did charge us a nominal fee, but it was small enough that we can’t remember what it was.

The next day we made it to our new home in Merida, with our two big dogs and with relatively few problems getting them there. We found along the way that there are hotels that take pets in Mexico, although they were a little surprised about the size of one of our dogs (but, to be fair, most people are). We discovered the Zar hotel chain which accepts dogs as a policy, an independent hotel, the San Sebastian, in Hermosillo which was very accommodating, and the Hilton, a hotel chain that accepted dogs but cost quite a bit more. And we discovered that, in a pinch, truck stop motels (also called “auto hotels” or “no-tell motels”) as they are quite easy going when it comes to dogs in the rooms. Our average cost for the hotels was $60 a night, which we think was quite reasonable. And now we’re here, dogs and books and all!

Check here for locations of the Zar Hotels on their website. 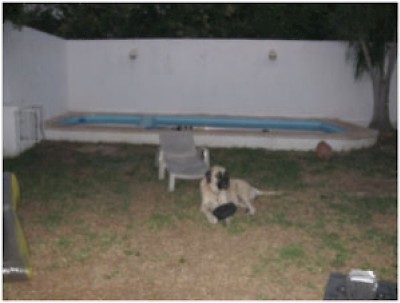 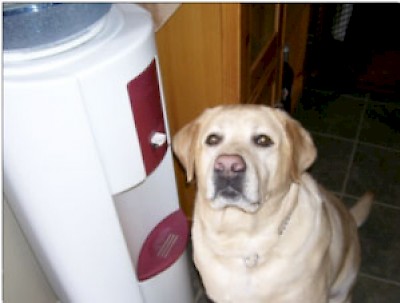 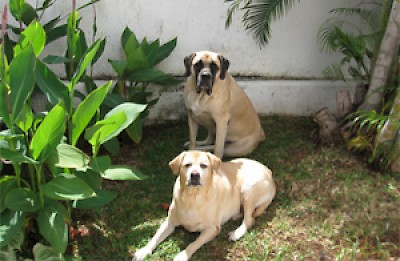