Princess of Yucatan: Power of the Signet

For a space the gaunt old man lay still. Nakah, wild with fear, laved his face in cold water, chafed his wrists, sobbed to her gods to bring back this one near kinsman she had in all the world. By degrees, Copan regained his senses. He sat up, clutching the stone fragment to his breast.

"Nakah, come close," he whispered. "This stone bears record of fabulous wealth, gold, jewels. They lie hidden in the faraway secret Monjas, the monastery of our tribe. To you and to me alone, because we alone can read the old sacred writing, is revealed the secret route that leads thereto. Help me now to my pallet. We must sleep to have strength. Tomorrow may see the beginning of a far journey -- "

"But how?" questioned the girl in amazement. "We -- quarry slaves -- leave this place -- journey? It will not be permitted -- "

"The way will be opened," said the old man cryptically. "And now, let us sleep."

On the morrow, Copan arose before the dawn and had achieved a most careful toilet before the usual blare of conch horns awakened the slave camp to its long day of labor. The old man had bathed rigorously, smoothed beard and hair, donned a clean scanty garment, and now he stood ready to go, leaning on a new staff of oak wood.

And when she came, he lowered his voice to a whisper.

"Go on with your day's toil as usual. Say nothing of what I have told you. I will return at dusk."

Once outside his poor shack, Copan, tapping his way with the staff, set his footsteps along the familiar beaten path that led up to a slight eminence which was crowned with a commodious stone building, bearing above its lintel the Aztec military standard of an eagle upon a cactus branch. The quarry was under martial law and this was the dwelling of Tihua, overseer of the camp. Here the old man took his stand and waited until the overlord of the quarry made his appearance.

At the clank of Tihua's sandals upon the stone doorstep, Copan moved forward and bowed low, touching palms to the ground after the prescribed Aztec ritual of greeting.

"Master," he said, "I pray you have me taken before His Highness, Hunnac Cuit, governor of the city of Chichen Itza."

"Nay!" the soldier snorted. "Have I time to be sending slaves hither and yon?"

He broke off short to gaze hard at an object the old bondsman had drawn from beneath his scanty tunic and was holding forth in his hand.

This thing, so strange to be seen in the calloused palm of a slave of the stone pits, was none other than a glittering, pale-green jewel, engraved with the golden signet of the Tlahtouani, the Emperor of the Aztecs. Back in the emperor's own vale of Anahuac, such a signet as this, on the hand of a messenger, could fill the land with rustling banners and panoply of war. Even here in the far province of Yucatan, a like signet bore weight. Reverently the rough soldier of the slave guard touched his heart and bowed with palm to earth before it.

"How came you by it?" he questioned.

"It was given me long, very long ago," said Copan, straightening his bent shoulders, a new dignity seeming to sweep over him.

"It gains your wish," said the overlord, turning on his heel and stepping back into his dwelling.

Here he jangled the bells that fringed his door curtain to summon a slave, sent the fellow to bring two soldiers of the guard, and into their care he committed Copan, telling them to carry him before His Highness, the governor of Chichen Itza.

Hunnac Cuit, military governor of the conquered province of Itza, administered his office with considerable degree of state. Indeed, his palace and court were fair replicas in miniature of things imperial back in royal Tenochitlan, capital of the great Aztec Empire. This provincial chamber of justice was a spacious hall set in the midst of a courtyard bounded by fragrant-flowered shrubbery. Rich carvings adorned door and window openings. When Copan and his two guards entered teh chamber, court was already in progress. His Highness, Hunnac Cuit, governor and judge in one, sat on a dais beneath a canopy. Before him on a stool reposed the conventional Aztec symbols of law, a crowned skull and the golden arrow. Swiftly, one after another, cases were called, witnesses heard, decisions made. A thief was condemned to hard labor, a poacher on the royal preserves went into exile. A youth given to profligacy and pulque -- a drunkard -- came next. The somber-robed judge lifted his hand to raise the fatal arrow and give the death sign, for in the code, death couuld be the penalty for prodigalism. Then he paused and gave the fellow, who was a mere youth, another chance at life. And so the morning went -- cases, judgements, sentences.

But Copan the Blind had no part in this. He sought no open appearance in the great hall of justice. Instead, by the potent power of the royal signet, so strangely displayed in his toil-scarred hand, he gained from chamber attendants permission to await in a small rear room a private interview with His Highness.

It was almost noon before the governor, under press of many duties, at last made a space to interview the ragged petitioner who so mysteriously refused to come before His Highness -- demanding instead that the governor-judge come to him.

As Hunnac Cuit in ceremonial robes of black, silver-embroidered, swept into the bare little rear chamber, he rasped impatiently.

"Who are you, demanding audience? Speak, time presses."

At the sound of the voice, Copan rose to his great height but made no answer. Instead, he lifted from his sightless eyes the ragged bandage that habitually concealed the upper part of his face.

Stay tuned for the exciting conclusion to this chapter next time!! 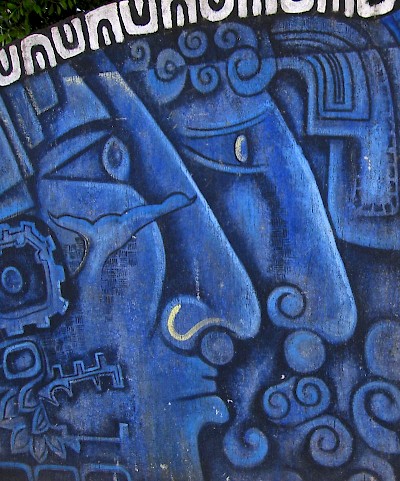 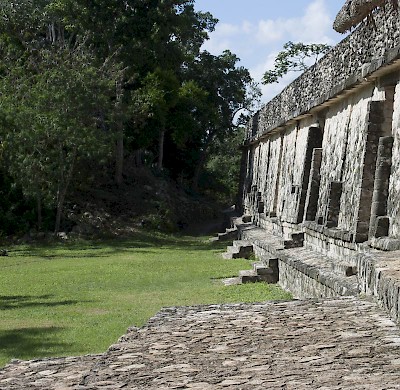