Princess of Yucatan: Cave of Stone Flowers, Part I

At the mere thought of venturing again into that spirit-haunted hole in the ground, the Mayan hunters were filled with fear til their skin roughened like the skin of a picked turkey. But ay, for all their shivers, they were brave ones. So, without more ado, preparations were made to escort their blind leader into this dark place of the under-the-ground. As plans were made, a few other hardy ones decided to go along, among them young Nakah and Calcingo.

First, a broad stair must be made, down which the blind one could tread. For this a pair of trees were felled, notches hacked at regular intervals down the trunks, and into these notches crossbars of wood were set and bound firmly into place with lengths of the strong, wiry anikab vine. Another crew cut bundles of long dry faggots of the ta-che wood for torches. The end of each faggot was split downward into fine splinters that would light quickly when sparks were struck with the flint fire-makers. Such torches as these would flame high and bright.

To those re-entering the cave, came again that smell as of old spices and crushed leaves. A puff of wind sucked downward with a moaning sound. As the men reached the bottom, once again their feet moved through soft clinging things. But, ah, now the torch glow showed these to be merely tall pale ferns that grew knee-deep over this portion of the cave floor. In a few places dim light filtered through cracks in the cave roof overhead. Down through those cracks, wind-blown fern seed must have drifted ages ago.

Hardly had the group set foot on the bottom before all about them the torchlights revealed traces of ancient man and his handiwork. Across one side ran a barricading wall of heavy stone, with other stones placed close at hand so the way into farther reaches of the cave could be quickly closed. Still further evidence of human occupation were the numerous haltunes or water troughs of hollowed-out boulders set to catch the drip of tiny springs that trickled from the walls.

Led to the spot of which Ek-tal had told, old Copan knelt and began to pass eager finers over the chiseled stone, scraping away deposits of earth and mold, seeking for carvings that meant written words, not mere decorative scrolls.

Nakay, for her part, did some exploring of her own on a high, deep stone shelf that ran along one side of the wall. It was just such a place as women folk of long ago might have chosen to perch upon to work at their arts or home duties. And sure enough, the girl's probing stone scraper, digging through dust and mold, brought to light a tiny terracotta vase and a carved conch-shell ornament.

From the entrance cave, high vaulted openings led into black spaces -- other chambers and tunnels these must be. Nakah slid down from her perch to join Calcingo, Inam, Canul and Nahau, who were lighting fresh torches, preparing to penetrate deep into this underground maze.

The group passed through one of the doorway-like openings, moving slowly, and pausing now and then to make marks on the wall for a guide in returning, for there could easily be false ways and blind passages down here. Sometimes they trod through tunnels with walls so dark and earth-colored that the torches lighted them scarce at all. Other places they entered were high-domed and glistening, some gray-tinted, some pearly white in color. Then they came to a place where the floor tilted sharply downward into the darkest of the dark rooms yet found. Of a sudden, as their torches were pointed searchingly, this way and that, the light gleamed on green eyes, jaguar eyes, many of them peering out of the darkness.

He made a movement as if to unsheath his knife, then paused, stood rigid. What good were knives against demons?

The whole group of Mayan explorers stood stock still, as if turned to stone. Then they breathed again, in great gasps of relief. Their wavering torchlights had revealed that the jaguars were made of stone, great towering carved beasts, with inset eyes of gleaming green that were stones too. A few forward steps and their torches showed that every knob and project point in this stone chamber had been carved into the heads of jaguars, some benigningly placid, some with snarling wide-open jaws. Flicker of torchlight made those fanged ones seem ready to spring and rend and tear. Ai... but what artists had been those ancient people who had labored here long ago!

From the room of the jaguars, the exploring party moved on to other caves. Room succeeded room, some mere low earthy tunnels, others wondrous and glistening. Finally, the end was reached in a great room, so beautifully ornamented by nature that no man had dared carve his own handiwork there. Through the ages water falling, drop by drop, from the ceiling above had enveloped every stone and knob and point below in a gleaming crystal-like limestone. As other crystal drops had fallen, these had added gorgeous sculpturing to the surfaces, turning mounds and points of stone into shapes like carved vases, like sculptured figures, like a fountain with crystal drops rimming its edge. But most wonderful of all were the glistening flowers of crystal. Gleaming stone creations, some like tightly closed buds of snow white, other blossoms wide open and set about rounded centers and pointed centers.

"Cave of Stone Flowers," she whispered in awe. "Loltun, cave of the blossoming stones", the men whispered too.

This was a place long sung of in tribal traditions, but only now seen with the eyes.

Stories raced through the mind... stories handed down for generations, telling how in the long, long ago, when the Mayan race had first come to this land, a whole tribe had found refuge in a place of marvels, the great Cave of Loltun. In later tribal wanderings, the beauty spot had been lost, but the songs that told of it lived on.

Ai, why Nakah herself had many times ung the Song of Loltun. Now she walked softly about, touching the beauties with reverent fingers: flowers, stone fountain shape, a bent crystal form like a kneeling maid, slender columns that made clear, deep notes when rubbed with a wet finger.

Then they must all follow the marked way back to the very beginning of the caves, to tell Copan the Leader of their find.

Camp was made on the rise of land at the mouth of this maze of caves. Day after day the Mayas lingered on in this vicinity. Great heaps of dry ta-che wood were gathered and split into torches. One after another, the wanderers ventured down into the depths to see the wonders.

The beauties of the place could come to Copan only through the telling of his companions. But for the blind man, deep interest was here in the search with his finger-tips for carvings that meant writings. Now and again his eternal seeking brought him to bands of carvings on walls, on boulder stones, even on the rock floors of some of the caves, but these seemed mere decorations, with naught of words or records in their whorls and twists.

Nakah for her part greatly enjoyed this sojourn in the cave of her ancestors. She often wandered through the long string of chambers to the room of the carved jaguars and the magnificent domed place of the crystal-dripped flowers and figures. But in the end, the real fascination for her was the finding of little things made by those human hands of long ago. Her favorite perch was the stone shelf in the entrance cave. Here, with sticks and slivers of sharpened stone, she went digging down into the past through the shelf's thick covering of drifted earth, root-growth, humus.

Small homely bits were what she uncovered, ashes of cook fires, a stone knife, a red pottery bowl, a clay spindle. But they were things that stirred thoughts. She had but to close her eyes to vision the folk that had once lived and labored here -- men chipping flint into weapons, carving ornaments from bone and pearl and shell pieces; women bent above the pots, cooking beans and corn from the fields above ground; women laughing, talking, singing as they sewed on deerskin garment with polished bone needles; children climbing in and out of cave crannies, shouting and racing in their play.

Not all of Nakah's tiem was given to visioning. She endured a deal of labor in helping her grandfather scrape and dig along old carvings, raking off the mold, brushing out earth crust with bunched twigs. Her fingers helping his in their eternal feeling along carved lines, seeking, seeking. Now and again old Copan found sets of symbols that held him puzzled. These might be writing or, at least, the first primitive gropings of his ancestors after written words.

Eventually, though, Copan did find inscriptions set in forms near enough like thesymbols he knew for him to translate them after a fashion. Long he pored over these, his sensitive fingers tracing and retracing the carved lines. But the crude glyphs chiseled here were mere lists of some hero's deeds, name of a warrior who fell in battle, name of a son born to a tribal leader. Squares marked on a stone could be the record of fields planted in maize or beans.

Naught was set down in stone-carved writing, though, that could serve as a map, or that could give directions as to how to find a hidden temple or a priestly treasure cache. Ai, the folk that had dwelled here must have had their being in the long-gone days before the Itzans became a great nation, before they built cities, before they stored away a secret treasure for future generations!

Copan and his council of leaders realized that it was useless to seek further here for guide stones to point the way for them. A pleasant interval of rest had been this tarrying at the Cave of Loltun, though, and all felt sorrow at leaving this place of beauty and tribal interest.

anikab - a Maya name for this plant 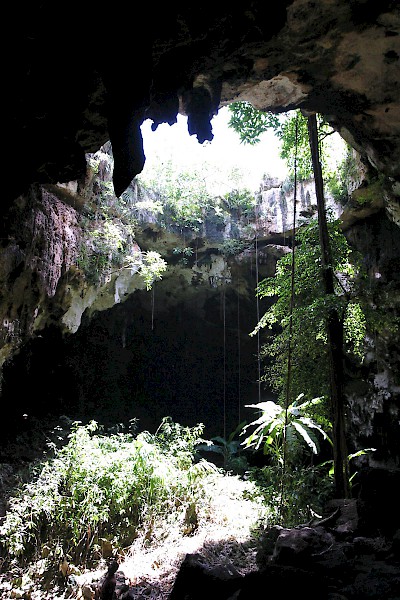 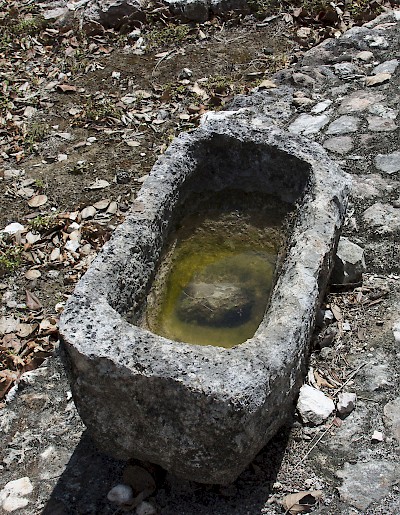 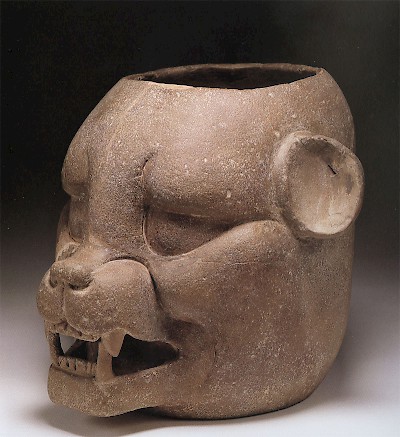 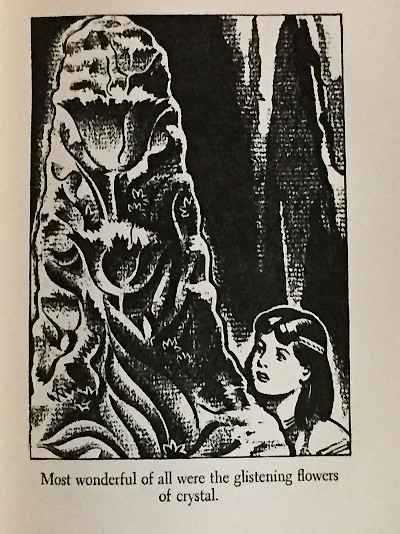 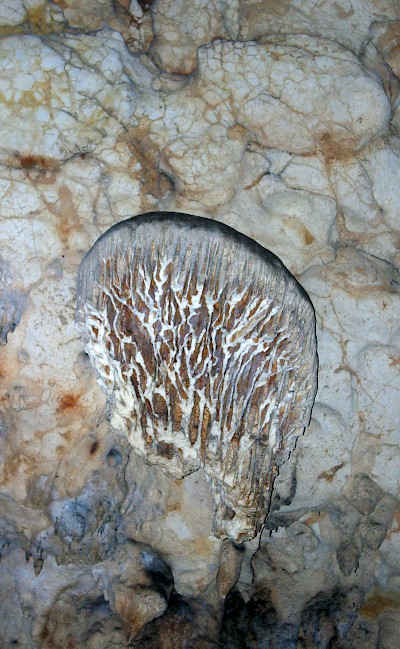 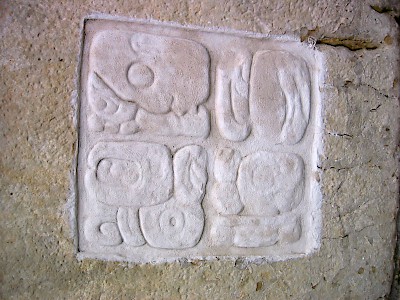 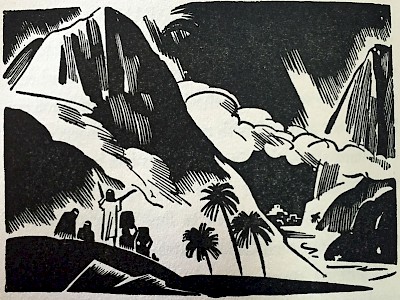