This political novel* is a translation to English of Morir en el Golfo, which was originally published in 1986 and served as the basis for a Mexican movie of the same name in 1990.

The author, Hector Aguilar Camín--a journalist, novelist and historian--was born in Chetumal, Quintana Roo, in 1946. His work frequently deals with Mexico and its problems. In the case of Death in Veracruz, the political focus is on intrigue, corruption and murder at the union level in the Mexican petroleum industry in the 1970s and 1980s. The movie version, however, focuses on a love triangle that is a secondary plot of the novel.

The story is told in the first person by a respected journalist from Mexico City who meets an old friend named Francisco Rojano, a mid-level politician married to the woman the journalist had loved but not won back when they were university colleagues. Her name is Anabela Guillaumín, daughter of a wealthy family of landowners near Poza Rica in the state of Veracruz.

Rojano has political ambitions, but also has a problem. Anabela had inherited quite a lot of land from her family and together they had invested in the purchase of more. The problem is that the local Sindicato Petrolero (oil workers union) is also aggressively acquiring property in the same area, and Rojano has discovered that landowners who refuse to sell to the union die in suspicious circumstances. The leader of the union and political strongman of this region north of Veracruz is an unscrupulous but cunning man named Lázaro Pizarro.

Rojano enlists his old journalist friend in a dangerous scheme to expose Pizarro. It is this circumstance and the relationship among these characters that forms the centerpiece around which the story revolves.

The journalist has several interviews with Lázaro Pizarro in which Pizarro attempts to make the journalist understand what he is attempting to do and how he goes about achieving his objectives. The messages he delivers are usually cryptic or metaphorical, he never says exactly what he means, but Lázaro always comes across as extremely sinister—a very scary man. He is building a utopian empire for his union workers, a “just” and ordered society which will benefit all the members. He perhaps represents a twisted view of the Mexican revolutionary who will stop at nothing, not even murder, to achieve the ideal society he envisions. One of the explanations he gives is the story of Noah’s Ark, except in his telling not all the animals aboard the Ark arrive safely at the destination. For the welfare of the majority some of them must die.

In fact all the characters in this novel are painted in chiaroscuro, they are neither good nor bad but somewhere in between. Sinister though he may be, Lázaro has a vision to make life better for the poor petroleum workers over whom he rules like a patriarchal tyrant. He does for them what the government promises but does not do, and they worship him for it. Even the narrator is not a particularly principled man. He enters into a love affair with his friend’s wife, and continues with the affair (scrupulously keeping it more casual than committed) even after Rojano’s death, another one under very suspicious circumstances. Anabela, for her part, is the most determined and Machiavellian of them all. She wants revenge for her husband’s murder and she wants to preserve ownership of the land that has been in her family for generations. In the end, it is she who appears to have come out best from this strange and sordid tale.

This is a good read and a competent translation of an important contemporary Yucatecan novelist. And it may be an accurate view of the underbelly of political activity at the local level in Mexico in the late 20th century.

*A political novel uses fiction to explore political power, and often to expose the misuse of such power. This review of Death in Veracruz was written by James Dayton Gunn, PhD, a regular contributor to YucatanLiving.com. Death in Veracruz was written by Hector Aguilar Camín. Published by Schaffner Press, Inc. (October 19, 2015). The book is also available in a Kindle edition through Amazon. 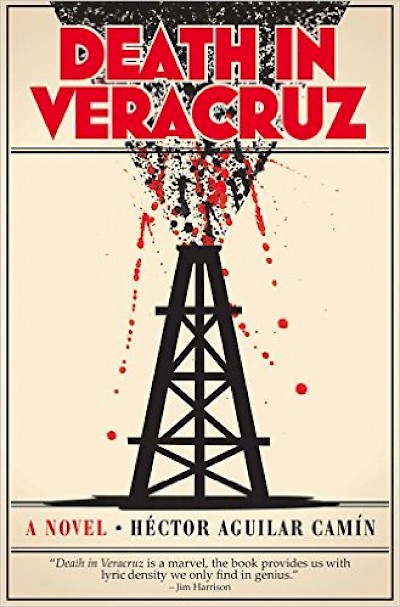