Life began inauspiciously for Benjamin Ramirez. Hearing about his 23 years as a corporate physician for Dupont Corporation in Wilmington, Delaware, you would never suspect that his journey began in Mexico City, as one of 7 children. His middle class father and mother were raising 2 boys and 5 girls while running a bar & restaurant when their lives were cut short by an accident. At only 4 years old, Benjamin was left without parents. Life went on, of course, and he was raised by his older sister, lacking parents but rich in exposure to the culture and art that was available all around him. He played with his friends in Alameda Park as a boy, even at a young age entranced by the sculptures there. As a teenager, though he couldn't afford the art, he collected posters from art shows at the different museums around the city, consistently attracted by figurative art.

Time passed, and Benjamin grew up to be a smart and responsible young man who went to UNAM Medical School, interning at the National Medical Center and doing post-doctorate training at the University of San Francisco in Toxicology and Occupational Medicine. Upon graduation, Dupont presented him with an offer he couldn't refuse, and he ended up working there for over twenty years.

After a time, Benjamin found himself living a comfortable life on the East Coast, with the means to afford the art he once just admired in throwaway gallery posters. He began collecting art, traveling regularly back to Mexico, visiting galleries, getting to know artists and participating in art groups. He was still drawn to figurative work, and the collection that lines the wall of his house here in Merida is full of figure drawings and paintings that he began collecting while he worked at Dupont. He collected works by artists such as Jose Garcia Ocejo, Rufino Tamayo and José Luis Cuevas as well as many beautiful works by lesser-known artists. And then one day, while treating a patient, Benjamin realized he wasn't going to live forever. He realized he could afford to retire. And with the same clear intention that he used to become a successful doctor, he abruptly switched directions. He enrolled in the Pennsylvania Academy of Fine Arts and he spent the next five years rediscovering the artist within.

Of course, that journey is a long and winding road, and never-ending too. Benjamin eventually earned his Certificate in the Academy's program of Fine Arts, having spent three years in the art classroom and two intense years in the studio, painting, drawing and making prints. Upon graduation, he set out to go back to Mexico. Like Goldilocks, he tried Oaxaca, but it was too isolated. He tried Ajijic, but it lacked culture. He tried San Miguel de Allende, but there were too many foreigners. And then he came to Merida, went on a Merida English Library house tour, saw the potential and the rich cultural offerings and decided that Merida was just right!

And his art? Benjamin's art turned a corner and headed off in a different direction as well. Whereas he was initially drawn into the world of art by figurative drawings and paintings, after taking a class called Painting Beyond the Line, he suddenly found himself passionately exploring the world of abstract art. Since that class, during his two studio years at school and since he moved to Merida in 2006, Benjamin has been exploring the world of abstract art. Whereas he once dismissed abstract art as unimportant or uninteresting, he now found himself fascinated and has continued to explore that fascination ever since.

We looked around Benjamin's small but light-filled studio in the brief moments we are there for clues about who the artist is and what makes him tick. As lovers of figurative art ourselves, we noticed that he is not unskilled at drawing the human figure, for instance, which he does for exercise. So why does he shun that in order to pursue the abstract? He says it is the pursuit of the ability to express space and emotion through the sole use of color and line. His recent show at the MACAY features 24 abstract drawings, for example, that have been created to communicate the emotions he has felt while wandering the streets of Merida, where his eye was captured by the intricacies of light playing on the many wrought-iron door and window protectores (protectors). We looked at some of the works that he had ready to ship to the museum and some of them definitely communicated the emotions that we too have experienced on similar sojourns. As photographers, we are always extremely conscious of light, and it is obvious from his works, that he too is paying attention to the unique play and variety of light here.

It is obvious that Benjamin is enchanted by color. Though he is the epitome of a reserved gentleman, we have noticed that he is always impeccably dressed... in color. When we walked with him through his garden toward his studio, he explained how the colors of the tropics have been so shocking and surprising to him. Benjamin still shows his work in Philadelphia and people have commented about the bright colors... "But look around you!" , he says, and his eyes light up. "Those colors are real here!" Indeed, as we walk past his glittering aqua blue pool, inset with darker blue glass stones, the green leaves are screaming green next to a yellow you could only find in a box of neon crayons. Then we walk into the shadows outside his studio door and see the subtlest of blues and purples reflected on the white wall. Inside his studio, Benjamin shows us some of his older works... huge canvases filled with patterns of light and dark blue, like the shifting shadows and light on the surface of his pool.

We're seeing colors everywhere, just like we see in Benjamin's drawings. Aaah, now we're beginning to get the idea. A brown canvas with different shades of purple pops out at us, defining a feeling of space that isn't really there. We're beginning to think that appreciating abstract art takes attention, a little bit of concentration and a willingness to let go of preconceived ideas of art. Perhaps these are some of the things that have attracted Benjamin as well, and provided him with the challenge that he so obviously enjoys these days. He's no longer providing healing and support to his corporate patients. Instead, he's diving in and letting go of restrictions and constrictions in a never-ending quest to express the experience of light and space.

Benjamin, like Merida, presents a reserved facade to the world. But behind the facade, a world of light, color and emotion splashes, bubbles, emerges and dances... there's a window to it all right here, framed and hanging on the wall.

Experience Benjamin Ramirez' work for yourself during the second quarter of 2008 at an exhibit at the MACAY in Merida. In addition, collectors can contact Benjamin directly by email at benjaminramirez@cablered.net.mx. 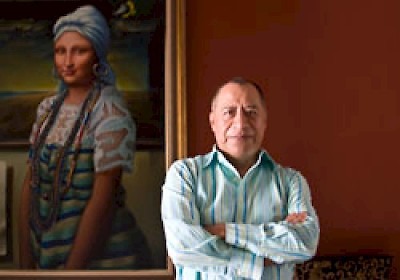 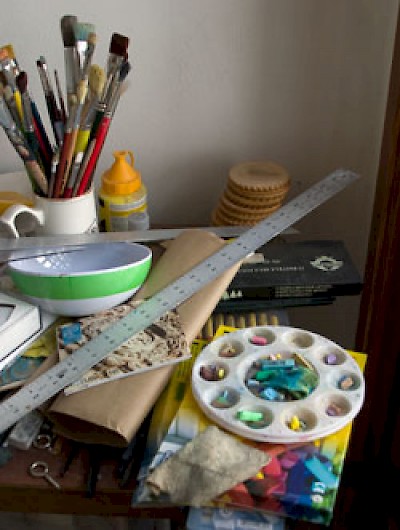 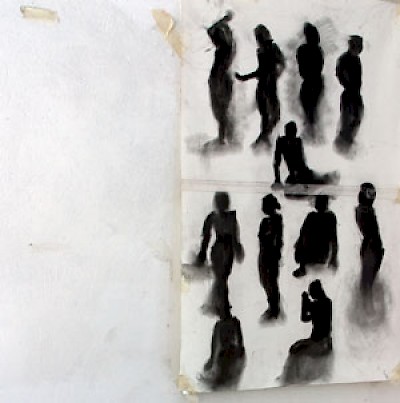 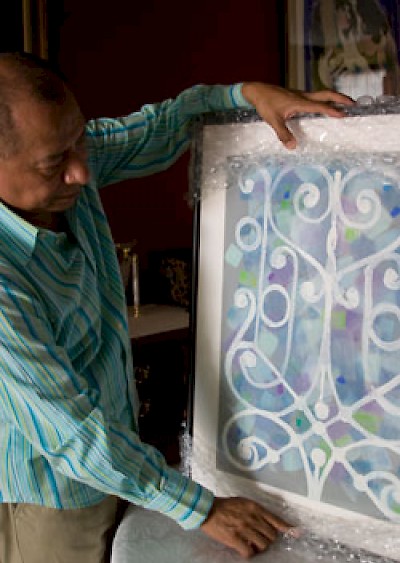 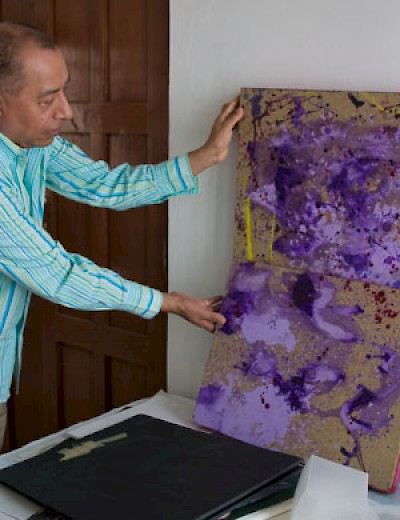